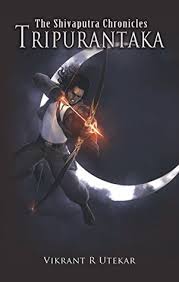 Here is my review on one of the most recently published mythological fiction- The Shivputra Chronicles TRIPURANTAKA by Vikrant R Utekar. The cover art of the book is designed by one of the most phenomenal artist I have come across, Anirudh Sainath. It has elements which generate enough interest in readers to pic the book. It depicts the lead character drawing a magnificent bow armed with the most destructive weapon to annihilate the evil.

The book is an illusory classic tale revolving around six gifted prodigies of the three Kings of Gods, who are the last line of defense between mythology and reality called the Devputras. The novel is set in the fourth quarter of the world’s lifespan-The Kalyuga. The protagonist of the tale is Chandrashekhar Kashyap, The Shivputar; the one who carries the gift of lord Shiva and Shakti, the manipulator of energy; the one with phenomenal strength and speed, the daughter of goddess Adishakti. The Devputras are the chosen heroes to fight the battles against the evil that no ordinary can fight. They reside at a fictitious place in the outskirts of Mumbai called Vaikuntha. Where the six chosen ones are in charge of training, survival and subsistence of the other sons and daughters of other elementary gods and goddesses. The tale starts with the Chandrashekhar rescuing Shakti from the capture of a Rakshasa and introducing her to her real self and the power she was gifted with. What follows is a nail-biting adventure woven with several twists and turns, that ends on a very optimistic note.

The story carries an interesting plot which pivots around a premonition of the rise of the greatest evil against the world. When Chandrashekhar and Shakti embark on an onerous journey to discover their own capabilities and strengths they are guided by the greatest of Gurus, the devout Shiva worshiper. There are several anticlimactic points in the tale that keep the readers guessing as to the true identity of the Devputras. The tale cleverly interweaves elements of mythology with the fictional events and this makes the narrative all the more realistic and one can connect to it.

Vikrant R Utekar has done a commendable job with the brilliant and power-packed narrative style that he has employed in writing this book–a more than promising start for a debut author. Interweaving so many characters in a single tale and yet maintaining the credibility and logic, is quite a challenging task. Vikrant has ensured this to the tee.

There is one aspect which I need to mention here though. The romantic angles in the story is handled in a somewhat abrupt fashion. Perhaps this is an area that Vikrant might want to work on. Having said that, the above factor is not of prime concern as the story is mainly a mythological fiction.

Lastly, the book ends with a subtle promise of a sequel that will keep the readers craving for more! One will definitely get hooked to the book !